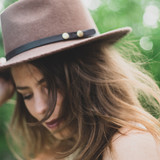 Julia Jonas is a singer-songwriter/producer based in Stockholm, Sweden. Julia's recent release “Walk With Me” captured the imagination of listeners all over when fashion brand Ellos used it for their TV fashion campaign in 2019. Covers of the song have since been released by well known Swedish artists such as; Loreen, Sabina Ddumba, Molly Sandén, Molly Hammar & Jennifer Brown. Raised in Stockholm, born in Cape Town, South Africa to a Belgian mother and South African father, and with a melting pot of travel and cultural references to draw from in between, Julia s eclectic musical style is often described as: magical, refreshingly raw and at all times honest to her life and experiences.