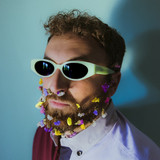 Jacopo D'Amico, who records and performs under the alias Dargen D'Amico, is a rapper, singer, and producer based in Milan, Italy. Active since the late '90s, he once went by the name Corvo D'Argento. He was part of Le Sacre Scuole and released a 2000 EP, 3 MC's al Cubo, with the group. D'Amico then went solo and released seven albums from 2006 through 2013. Also prolific as a collaborator, he has released material with the likes of Prodigio, Two Fingerz, Marracash, and Useless Wooden Toys, among others. ~ Andy Kellman, Rovi