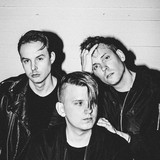 Album debutants Janice Prix is a Swedish band, forged in opposition from a conservative hometown, who are starting to convince people with their big cinematic pop songs tackling heavy themes - both at home and abroad. The band released their debut album 'Waking'

in 2020. The new album is a collection of 12 songs, including the previously released singles and new, yet unheard, songs. All marked by a deep intent and care, as the band puts it ‘We went great lengths making sure that everything was exactly as we wanted it to be and that every song was great in its own right’. With dark choruses, meaningful lyrics and rapid beats, the debut album Waking is set to give an insight into real life experiences, whether it’s hurt or happiness. Talking about their album, the band said “A lot of effort was put into making the songs revolve around things we feel are truly important".