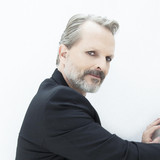 Miguel Bosé has been a force in Latin music in a career that has spanned dozens of albums and film roles, his own television show, and work as a theater director. His resonant, signature baritone has helmed records in a remarkable variety of styles, from teen pop, disco, new wave, and post-punk to mainstream, art rock, and dance pop. His recordings have graced no less than 45 Top 50 singles -- including ten number ones -- in six countries; his hit single "Linda" (featuring Malu) topped the charts in three countries simultaneously, followed by his own number one solo version a month later. While his first ten Sony albums were successful and all firmly entrenched in teen pop, his move to Warner Bros. for 1985's Bandido found him make a startling musical transformation that saw him relentlessly crisscross styles and genres from album to album and sometimes single to single. His career in the 21st century, beginning with 2002's Sereno, has been the most successful, netting Latin Grammys and other awards regularly. Since 2002, he has issued no less than six albums charting within the Top 10 on the Latin Pop charts. The son of an actress (Lucia Bosè) and a bullfighter (Luis Miguel Dominguín), Bosé grew up in the arts -- with Picasso and Ernest Hemingway among his family friends. He often traveled from his homeland of Panama to Milan, New York, London, Paris, and Madrid. He made his film debut at the age of 15, and at age 21, he began his singing career, which eventually led to international pop stardom. Between 1977 and 1982, he recorded several albums for CBS, but it wasn't until 1985 that he had his first hit with "Bandido." A year later, he signed with Warner Bros., which led to more introspective LPs like Salamandra, which was overseen by producer Celso Valli (well known for with work with Eros Ramazzotti). This production was followed by XXX, Los Chicos No Lloran, and Directo '90, a live recording compiling many of the artist's hits. In 1993, Bosé's music moved into a more political vein with the album Bajo el Signo de Cain, which addressed such issues as Yugoslavia's political turmoil, ecological concerns, and aspects of his stardom. It ended up being his first platinum album. With an increasingly powerful international profile as a singer and actor, he released Laberinto in 1995 and went on a 125-concert tour of Spain and Latin America to support the album. This was followed in 1997 by 11 Maneras de Ponerse un Sombrero and, in 1999, a greatest-hits album, Lo Mejor de Bosé. In the following decade, Bosé's popularity continued undiminished; he released four more studio albums and two live albums. In 2000 he recorded Girados, a collaborative double-live album with Ana Torroja. 2002's Sereno won him a Latin Grammy for Best Male Pop Performance, while 2005's Velvetina saw him stepping outside the box to experiment with electronic dance-pop (even the cover was a clear homage to Kraftwerk). In 2007, celebrating 30 years in the business, he made the album Papito, where numerous stars of Latin music -- including huge names like Juanes, Shakira, Ricky Martin, and Laura Pausini -- joined him in re-recording duet versions of some of his biggest hits. A younger listenership was turned on to his music by the single "Como un Lobo," featuring his niece Bimba Bosé, herself a successful singer and model. He then took the album on the road, resulting in the live effort Papitour. His 18th studio album, Cardio, was issued in 2010. Produced by Bosé with Nicolas Sorin, it spent all of the spring and summer on the charts in Spain, as well as Mexico and Italy. Also in 2010, he was awarded honorary Colombian citizenship for his efforts toward peace in that country. In 2013, he was honored by the Latin Grammy Academy as Person of the Year. Amo, released in 2014, became a Top Five success in Spain, and his MTV Unplugged set from 2016 hit number one in both Spain and Mexico. During his career as an international pop star, Bosé has portrayed a cross-dresser in Pedro Almodovar's High Heels, worked with Andy Warhol on two videos, and witnessed the banning of his video "No Encuentro un Momento Pa' Olvidar" for its controversial sexual imagery. Defying the contemporary formula for pop success, his music has been described as a global fusion of many musical influences. At the center of this is all the passion and expression of a Latin artist, and Miguel Bosé has constantly incorporated more diverse musical elements than many of the genre's crossover pop stars. Esencial Miguel Bosé, a compilation of his early Sony hits, was released in 2018. ~ Zac Johnson & John D. Buchanan, Rovi