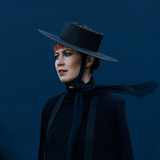 ARE MADE OF DEEP SEA, SOLACE & LIGHT. ELECTRONIC MUSIC THAT DARES TO DIVE DEEPER Hundreds are Eva & Philipp Milner & Florian Wienczny. Hundreds released their first self-titled album in 2010, since then they have been touring almost constantly in Europe, especially Germany, Austria & Switzerland. „Hundreds have built a career around a sound that offers ghostly reminders of the past while enriching the present with its bounty. This combination of a never-nostalgic love for the original pioneers of electronic pop together with a far-sighted, refined understanding of today’s most thrilling innovators has also earned them a reputation as one of Germany’s most successful indie acts, something particularly significant for a band with a female singer. If they were initially galvanized by the work of artists like The Knife (another band formed by siblings) and Thom Yorke, then spurred on further by acts as diverse as Grizzly Bear, Cinematic Orchestra, Son Lux and St. Vincent, what’s emerged – reinvented and refined in their own image – is something defiantly their own.“ (Wyndham Wallace) In our own words: you will find the core of our work, when you come to our live-shows. We try to take our audience on a journey with us, giving you something special along the way. Come dance and dive with us! We look forward to meeting you! Our fourth studio album THE CURRENT will be realeased worldwide on March 27th 2020.