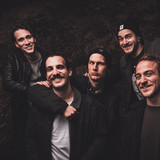 No Kings No Slaves

Featuring No Kings No Slaves

No Kings No Slaves are a five-piece from Lucerne (CH). After a first EP (recorded & mixed by Tommy Vetterli | Coroner & Ex Kreator) and many shows in Switzerland and Germany (with Modern Life Is War, Cancer Bats, Crossfaith et al.), they now release their Debut-Album “New Lease of Life”. The album was recorded and mixed by Manuel Wiget at New Sound Studio, then mastered by Troy Glessner at SPECTRE Studios (August Burns Red, Disturbed, Pentagram and many more). Intesive and versatile Songs The band manages to create their own energetic and emotional mix with elements from Metalcore, Melodic Hardcore and Groove Metal. With their Sound and stage presence, No Kings No Slaves are also able to captivate the audience and create “powerfull live shows” (rawk.ch). Gripping Lyrics The new album covers topics such as transience, social ills and toxic relationships. It deals with emotions like anger, grief and insecurity, but also spirit of optimism and joie de vivre.