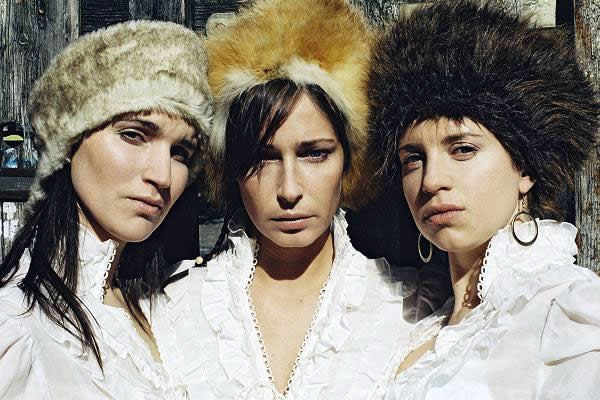 The Flemish trio Laïs, originally from Kalmthout, grew from humble beginnings to become one of the premier groups of the late-'90s Belgian folk revival. The seed of Laïs was planted after a folk workshop held in Gooik, where two of the three members' a cappella rendition of an Italian folk song brought attendees to their feet with applause. Comprised of vocalists Annelies Brosens, Jorunn Bauweraerts, and Nathalie Delcroix, Laïs' first major public appearance took place at the Dranouter Folk Festival in 1996. The young women earned high praise from fellow performer Emmylou Harris, offering inspiration for the years of hard work to come. The trio toured the country with the well-known group Kadril, followed by the recording of their self-titled debut CD, Laïs. The disc, featuring mostly Dutch lyrics, garnered consistently positive critical acclaim. Laïs went on to sell better than 12,000 units. The trio performed to sold-out audiences in the months that followed. Though a host of similar groups began to emerge, Laïs moved to the head of the pack on the strength of their live performances and radio singles like "Het Smidje." A 1999 appearance at the Dranouter Festival and a number of engagements opening for Sting in France bolstered the group's popularity, and they saw their debut disc go gold that year. Laïs' follow-up release, Dorothea, was recorded throughout 2000, hitting shelves in November of that year. The tour that ensued took the group as far as China, expanding their fan base far beyond their mainstay audience in Belgium and France. A third album was released in 2007, entitled The Ladies' Second Song. The record maintained a presence on World Music Charts Europe in the Top 20 for months following its release. ~ Evan C. Gutierrez, Rovi