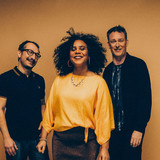 Zuco 103 – the patriarchs of the Brazilectro scene and the trailblazers of the Tropical Bass movement – are still cutting edge after 20 years. In 2019, Zuco 103 will focus on several new releases, starting with Tropicalismo, and a club and festival tour. Amsterdam, 1999: Lilian Vieira (vocals), Stefan Schmid (keys) and Stefan Kruger (drums) start experimenting with Brazilian sounds, combined with a jazz attitude and dance and dub influences, under the name Rec.A. Schmid came up with the term ‘Brazilectro’ as a banner for their music – Brazilectro turned into an international scene of kindred artists and deejays. International success followed quickly, as well as critically acclaimed albums, and tasty collaborations with – among others – Lee ‘Scratch’ Perry. Anno 2019, Zuco 103 sounds closer than ever: their wild mix of influences has deepened into an intense audio storm, which makes audiences worldwide bouncin’ and yellin’ for more.