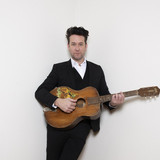 In the storied career of beloved Fremantle rockers Eskimo Joe, front man, bassist and award-winning songwriter Kav Temperley has played a lead role. He’s also been integral in creating the soulful collective Basement Birds, starting the small indie record label Dirt Diamond Productions and as a role model and champion for Oxfam’s “Close The Gap” campaign. In 2014, Kav stepped out on his own for a 3 month tour of Australia, in celebration of the 10th Anniversary of Eskimo Joe’s “A Song Is A City”, presenting the album in full. Kav then focussed on co-writing with various artists and producers at events such as ‘50 Songs in 5 Days’, mentoring young up-and-coming songwriters, in his role as an APRA Ambassador. 2016 marked Temperley’s debut as a solo artist and his debut outing as a curator, with the production Songs Of The Suburbs, Songs Of The Sea for the Fremantle Festival: a show which unites some of Perth/Fremantle’s finest songwriters. 2017 saw Kav play live shows at festivals such as The Golden Gift, Sunday Sundowner, Floriade Festival, the Fremantle Folk and Beer Festivals. He also contributed to the VAST project - over 32 artists converging in West Pilbara for a week of creation, recording and collaboration, culminating in 2018 in a live performance opening the Red Earth Arts Precinct. 2018 sees Kav releasing his exciting debut solo album, ‘All Your Devotion’ which features his new single ‘Pollyanna’. It will be out on September 28th and is available to preorder now.