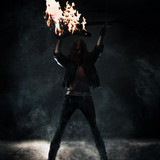 Valkyrja was founded in 2004 with the earnest intention of channelling violence, deprivation and loathing through means of extraordinarily potent audio emissions. Their ideals were permeated by passionate and boundless perversion – a sickly urge festering ever so vibrantly in the essence of its members. A will to cast off the manacles of societal enslavement and leave a dying world behind. The debut album, The Invocation Of Demise was recorded in Necromorbus Studio during March 2007 and then released in physical form by Northern Silence Productions six months later. Valkyrja quickly gained their reputation as a ferocious live act; a display of carnal lust leaving each stage with the foul scent of death. Drawn to the stench of putrid bereavement, Metal Blade Records contracted the band in 2009. The same year also saw a return to Necromorbus Studio for the recording of their second album, the most aptly named 2010 Contamination. Forged and conceived to reflect blood and fire - the third album, The Antagonist's Fire set the world aflame on the eleventh day of the eleventh month in the year 2013, released by the German underground cult label World Terror Committee. The past few years have seen the band subjected to several crucial line-up changes, igniting a period of utter despair that would sow the seeds for what has now come to pass: Throne Ablaze!