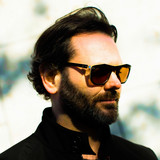 With his 30 years as a DJ, producer and label boss, Funkerman (Ardie van Beek, 1975) refuses to count himself as 'the old guard'. Nevertheless, all his achievements cannot be ignored: multiple chart positions, at the top of the club charts with singles such as 'Rule the Night' and 'The One', sold-out venues at home and abroad, the hit 'Speed ​​Up' on his own label Flamingo Recordings (established in 2004) and the many successful collaborations that followed. Funkerman has been traveling the world continuously for many years. Discovering ‘in the moment’ is one of those things that make being a DJ so special to Funkerman. No performance is the same. No crowd is the same. And that's what it's all about. That elusive connection with his visitors, that’s what he feels intuitively. This is how he flawlessly picks up what a room needs; which can take a crowd to the next level. Feeling is central to Funkerman's story. That feeling of him and his audience together. He knows that following the latest musical trends and hits is an easy recipe for a successful performance, but he demands more of himself. "I am at an age now where I only do what I believe in and identify with. And that is seldom the choice for an easy recipe. Capturing my audience with careful musical choices based on feelings in the moment... when that works, it feels like winning. No chart can beat that. "