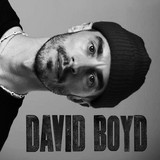 David Boyd, born in Copenhagen Denmark to an American father and Swedish mother received a blessing of several influences of music from his father that listened to rock and his mom that was pop centric. This ended up leading to the perfect blend of what is now the sound of David Boyd’s music. It wasn’t music that began David’s artistry but rather dancing. His connection to music through dance provided him an “instrument” for selfexpression that channelled his emotional state into his moves. Through dancing, David began to work with Danish and Swedish producers as well as musicians. It was in this realm that some of the writers he worked with that didn’t know English, would ask David for help with common American expressions and words. David began to be drawn to art of writing music and lyrics leading him to take a deeper dive and move to the United States. It was here David would form the popular rock alternative band, New Politics. As the world slowed with the global pandemic, David did not let this stop his writing. He took the time to create a solo project with music that was authentic to his new life as a father of a new daughter and tap into a level of self-expression he had never done before. The result will be new music for fans that will span everything from rock to hip hop and take them on a musical journey through the mind of David Boyd.