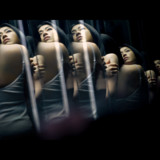 Hikaru Utada's debut single "Automatic / time will tell" released in 1998 sold over two million copies, catapulting her to top-artist-status at age 15. The first album "First Love" marked the highest number of CDs sold in Japan, a record that remains unbroken to this day. All of her albums that followed have topped the charts. The 2007 single “Flavor Of Life" set a world record for the highest number of digital downloads. She announced a hiatus from her music career in 2010, returning to her career of music in April 2016. Her sixth studio album "Fantome" followed in September 2016 to great success in both Japan and abroad with a #1 on the Oricon charts stretching four consecutive weeks for the first time, a #3 on the US iTunes chart, and over a million units total in sales of CD and digital downloads. Since March 2017, She has been with Epic Records Japan a division of Sony Music Labels Inc. The year 2018 saw the release of her 7th album "初恋", marked her twenty-year anniversary from debut, and going on her first Japan-wide tour since recommencing her music career. The theme song for video game KINGDOM HEARTS Ⅲ "Face My Fears" was released as a single in 2019. The track was co-created with Skrillex and marked Utada's first Billboard Top 100 in the US.

An EP including the A. G. Cook co-produced single "One Last Kiss" is available March 10, 2021. The track is the theme song appearing in the feature film EVANGELION:3.0+1.0 THRICE UPON A TIME （SHIN EVANGELION）.