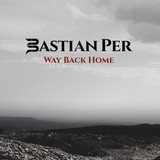 After receiving exceptional critical praise by internationally recognized media on their debut, Bastian Per announces the release of their second studio album, which deals with today’s poignant humanitarian issues and self-inflicted harm. The new concept album confronts the listener with philosophical discussions and existential dilemmas without sacrificing a bit of the band’s musical creativity and poetry along the way. The story revolves around leaders who have lost their focus and questions the impact of human actions, planting the seed to awaken a desperate need for change. In the year of the pandemic, Bastian Per felt the urgent need to address a number of ethical issues and seek shelter in the art of composition. In an attempt to show the complexity of what’s at stake, this wake-up call needed to strike the perfect balance between a comprehensive range of rich, intricate sounds and its powerful lyrics. The album features no less than prog legend Derek Sherinian on track ´Greatness Delirium´, performing an outstanding keyboard solo. “The musicianship here is of the virtuoso variety - the complex time signatures of instrumental Beginner´s Luck would give Dream Theater a run for their collective money. Bastian Per is most definitely one to watch in future”