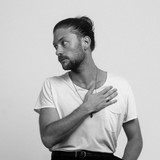 When independent singer-songwriter Matt Woods is looking for a great poem or lyric, he has one main criteria: “I just want someone to break my heart in the shortest amount of time possible.” With a raspy and world-weary vocal, Woods writes about the darkest realities of love, loss, and depression in futuristic soul songs that cut to the bone.   Woods grew up in the coastal town of Newquay, where he was always a keen observer of people and relationships. “It’s so mellow and laid back, it definitely sparked something in me,” he remembers. “I’m much more observational — I’m quite happy sitting in silence and watching things.” With an ex-West End actress and singer for a mum, Woods was exposed to musical theatre and classical compositions from a young age, playing the violin and singing in a cathedral choir. That was his world until his mid teens, when he became entranced by the hard-edged folk music of Ray LaMontagne, and the iconic voices of Nina Simone and Otis Redding.   Breaking away from his choir roots, Woods began teaching himself to play guitar, and nurturing the distinctive vocal he has today — a gritty, soulful instrument. “I want to just get as much emotion out of it as possible. I love the idea of getting to a point where it doesn’t matter if you don’t understand what I’m singing, you feel it anyway. I’m trying to sing from that place, rather than make the most pure and clean sound."