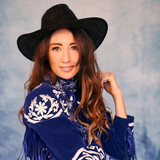 Honing her craft between London, Nashville and LA, Harleymoon’s sound is influenced by a diverse pool of acoustic and country styles, including Norah Jones, John Mayer and Maren Morris. Her 2020 debut "Space" rocketed to #1 on the UK country music digital sales chart and featured on Country Hits, Chris Country and BBC Radio. Second single "She Looks Like Me" followed with additional support on CMT in the US, and was added to editorial playlists by major global streaming services. Harleymoon performed the track as an exclusive live TV debut on ITV's Sunday Best! in September. Harleymoon's latest release "Lucky" received its live premiere on the London New Years Day Parade broadcast. The track hit the Top 5 on the iTunes country music charts and features on Spotify's Very Nearly Nashville playlist. In addition to her own musical output, Harleymoon has penned hit songs "Keep it To Myself" which charted in the top 10 in Eastern Europe for Jazzu and DJ Jovanni and followed up with "Should have Known" and "20 Seconds" with streams in the millions. She co-wrote "Is She Gonna Be There" for Violet Skies which has nearly 3 million streams. This year Harleymoon also wrote a viral song on TikTok reaching 1 billion shares and has

two commissioned songs for ITV show 'Sunday Best' title music and a Volkswagen commercial in June 2020. Harleymoon is also the daughter of Spandau Ballet's Martin Kemp and Shirlie Holliman of Wham! and the sister of Capital FM DJ Roman Kemp.