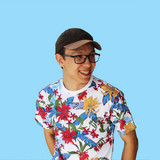 i make music NoxInBox is the project of John Nox, electronic music artist and producer, from Minneapolis, Minnesota. Since starting in 2012, NoxInBox has released with record labels like and GAXEL, while receiving support from blogs, such as Nest HQ, Melting of Age, and many more. He has also shared the stage with many artists, including WRLD, Slumberjack, Troyboi, Louis Futon, and Hudson Mohawke to name a few. Starting in 2017, John Nox has been collaborating with aaron. to form the music duo, GROUP.noxinbox.com