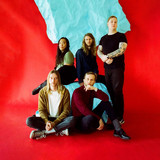 La Dispute has never been a band prone to settling. The five-piece from Grand Rapids, Michigan, is responsible for some of the most uncompromising, experimental hardcore music of the last decade. From their 2008 debut, Somewhere at the Bottom of the River Between Vega and Altair, to 2011’s Wildlife, to 2015’s Rooms of the House, La Dispute have continually pushed themselves to find new ways to portray some of the most difficult and universally affecting subject matters. Casting a wide stylistic net that includes – but isn’t limited to – jazz, blues, spoken word, screamo and prog rock, La Dispute have developed a sound that, while constantly evolving, is unmistakably theirs. It can be difficult for punk and hardcore bands in particular to evolve and maintain momentum simultaneously the longer they stay active. At a time of economic uncertainty, and with the music industry not being lucrative as it once was, creativity and reality are often at odds with each other. In spite of this, La Dispute has maintained the same attitude they started with. They are a band figuring out, as we all are, how to live meaningfully while also trying to make meaningful art without compromise. Panorama, then, is another chapter in a discography that tells everyday stories in a remarkable way. It takes you deep within the heart of the world we live in, which may not always be a comfortable or comforting place to be, but at the very least it’s a reminder that we’re not there alone.