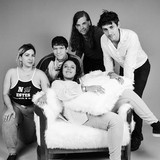 Emma Goldman, the pioneering feminist and anarchist activist, is the widely attributed author of the saying "If I can't dance, I don't want to be in your revolution." While there is some question of Goldman's actually saying it, if she did, she would almost certainly get along well with Downtown Boys, a six-piece multiracial, gender-integrated, bilingual rock band from Providence, Rhode Island that plays fierce but joyous punk rock with blazing energy, howling saxophones, and breakneck rhythms guaranteed to start a pogo frenzy on the dancefloor. Downtown Boys were formed by vocalist Victoria Ruiz and guitarist Joey De Francesco, who met when they were both working at a luxury hotel in Providence -- she as a customer service representative, he in the room service department. In his spare time, De Francesco was also a labor organizer, helping the mostly Dominican employees at the hotel get better working conditions and more equitable pay. Joey also played with an activist marching band, the What Cheer? Brigade, and when he quit his job at the hotel in protest, he brought the band along with him, and the video of their small but enthusiastic demonstration eventually racked up over 4,800,000 views online. Eager to make music dedicated to social and political change, De Francesco and Ruiz formed the band Downtown Boys with fellow artists and activists Will Cioffi (alto sax), Emmett Fitzgerald (tenor sax), Norlan Olivo (drums), and Dan Schleifer (bass). Downtown Boys released a self-titled ten-song EP in June 2012, and Sister Polygon Records helped the group put out a four-song vinyl 7" in February 2014. The established New York punk label Don Giovanni Records struck a deal with Downtown Boys, and their first full-length album, Full Communism, was released in May 2015; the album marked the recording debut of new alto sax player Adrienne Berry, replacing Will Cioffi. During their downtime from Downtown Boys, Ruiz and De Francesco are also members of Malportado Kids, who play a unique fusion of leftist punk and cumbia. Downtown Boys later reconvened for their third full-length record, and first for the long-running indie label Sub Pop. Ever socially and politically engaged, they released two lead singles prior to the album's release, "Somos Chulas (No Somos Pendejas)" and "A Wall." Cost of Living was produced by Fugazi's Guy Picciotto, and debuted a leaner edition of the group. Sax players Fitzgerald and Berry were out of the band, replaced by Joe DeGeorge on sax and keyboards, while Mary Regalado took over on bass from Dan Schleifer. Cost of Living came out in August 2017. ~ Mark Deming, Rovi