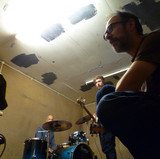 'like elvis costello fronting dinosaur jr' twitter live review 10/7/20 new single OUT NOW in the digiverse! a remix of 'ancient rome' by dave hale - also available on limited edition cassette > https://bromide.bandcamp.com/album/ancient-rome ‘Here it is given a brand new coat of paint courtesy of a Dave Hale remix which merely serves to magnify the song’s glistening melody, inherent beauty and innate charm’ GODISINTHETV ‘At the heart of the album is Ancient Rome.. highlighting Berridge’s knack of writing affecting melodies’ musicOMH REVIEWS FOR ALBUM 'I WOKE UP' RELEASED JUNE 2018 - 'Bromide haven't just woken up, they're alert and more keenly ambitious than ever' **** Record Collector 'Stunning.. if no one discovers this album now it will be claimed as one of the great lost albums of the era' 8/10 Louder than War 'I Woke Up catches the London-based three-piece punching a rather large and splendid hole in the modern alt-rock landscape' 8/10 godisinthetv 'Mining what was thought to be the depleted vein of bands like Husker Du and Teenage Fanclub and coming up with something brand new is in itself a great move only performed by genius' Audiofuzz 'a gloriously future-nostalgic racket.' Dancing About Architecture 'if you like Dinosaur Jr and The Replacements, you’ll love this’ 4/5 musicOMH 'a mighty fine tune from bromide' Gideon Coe BBC6 Music Webpage > http://www.theinternetatemysoul.co.uk/bromide.htm