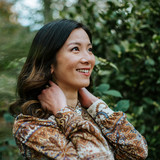 Taiwanese-Australian indie folk singer-songwriter Kim Yang writes songs that speak from her experiences as a partner, a daughter, a traveller and an insecure soul. Her ethereal blend of sounds balances delicately between vulnerability and power.   In 2019 Kim went on tour for her debut EP Ocean of Mind after a sold-out launch, she then played at the National Folk Festival 2019, Enlighten Festival 2020, Good Folk 2021 alongside Fanny Lumsden and StiffGins. Kim supported ARIA & APRA-awarded artists Tori Forsyth, Josh Pyke and Ben Lee on their tour to Canberra.   Kim's bushfire tribute Garden of Eden was aired on triple J radio and received 4.5 stars from Roots 'n All host, Nkechi Anele, who said: ‘Kim Yang is a force of nature, and she humbles me’.   Kim's latest single Fantasy

is about longing for her parent’s love during hardships. Kim left her family and moved from Taiwan to Australia in 2012. Her family never really expressed love in a physical or verbal way. Kim’s evocative lyrics and emotive vocals combine with bird songs, sombre cello, and dreamy keys to create a vulnerable soundscape that yearns for attention from her listeners. Kim released her sophomore EP Brave in September 2021, which is partially funded by ArtsACT. This EP is full of emotions and messages that need to be told in our modern world. It tells you that being different, vulnerable, courageous and loving is OK, all these emotions and feelings can co-exist.