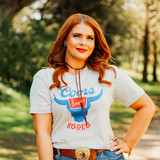 Lucie Tiger is the embodiment of a Southern-infused, Country Rock singer and is fast becoming known as a unique songwriter and an up-and-coming artist to watch both in her home country, Australia, as well as internationally. Lucie’s self-penned songs stand out amongst the country music crowd, coloured with a hefty dose of good old Americana charm along with that time-honoured Blues tradition of a sting in the tail. Following two USA tours and two EP releases, Lucie's first 2021 single, ‘Found My Home’, received notable acclaim in February ‘21, reaching no. 20 on the Music Network CountryTown Hot 50 chart and spending 13 weeks on the Nashville Music Row charts reaching no. 50. Her second single, ‘Midnight Goodbye’ peaked at #34 on the Music Network CountryTown Hot 50 Chart and will be hitting the Nashville Music Row Breakout Chart imminently after being one of the ‘Most Added’ singles to country radio in its impact week. Her upcoming release ‘Do Me Right’, due for release in November 2021, is an upbeat, fun take on Country Rock. Written by Lucie, the song features Lucie on vocals and acoustic guitar plus the talents of Bob Wray (Ray Charles), Will McFarlane (Bonnie Raitt) and Justin Holder (Jason Isbell) and was produced by John Gifford III and Don Srygley (GRAMMY nominees for Gregg Allman’s final album ‘Southern Blood’).