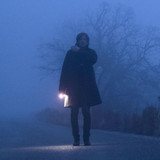 The instrumental post-rock ambience of Unwed Sailor has been guided by the vision of Johnathon Ford since its inception in 1998. Born in Oklahoma, Ford had been a member of Roadside Monument and Pedro The Lion. As a result of his own songs not melding with either, he formed Unwed Sailor in Seattle and has since been based in other cities including Chicago, Washington, D.C., Tulsa, and New Orleans. Ford has leapt in a myriad of instrumental directions, from angular post-rock rhythms, to dreamy ambient soundscapes, to the sounds of homemade instruments playing storybook nursery rhymes. Though all these directions vary in style, all of Unwed Sailor’s albums share a certain melodic sensibility, a flavor that’s undeniably Ford’s, yet each its own unique place in creating the sound and vision of Unwed Sailor.