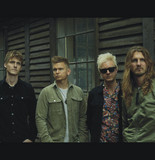 LUCER returns strongly with “The New World”, the first out of a series of videos/singles the band plans to release as a prelude to their new album, which is set to be released in the fall of 2021.   The new song is both the title track and the first taste of the Copenhagen rock band's third album, which was recorded in close collaboration with producer and H.E.R.O frontman Christoffer Stjerne.   The well thought through sound universe is largely due to the collaboration with producer Christoffer Stjerne, who, according to Lucer, had a different approach in the studio than they have been used to. He is not afraid of challenging and trying new things, and it has paid off. “The collaboration has been incredibly intuitive and easy”, the producer says. “Everyone has been open and receptive to inputs, and this has resulted in us moving the boys into a more modern universe and flirting with more genres”.   Like Lucer’s first two records, the newest in the series is also created with live performances in mind. The Copenhagen rock band has made a name for themselves both at home and abroad with their explosive energy and exciting stage shows - and it does not stop with “The New World”. On the contrary.