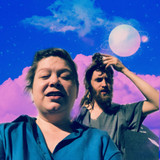 Stina and Leissi’s first new material since their LOVE album! The sound of summer is shimmering here with the first new material from Color Dolor in three years. “Shy” is a song about, well, being too shy to approach a crush or some interesting person” the band explains of the lyrical theme. The tinge of melancholy offsets the good vibes surging through the song. Keeping elements of an older song they were working on, Color Dolor reimagined the track, keeping the best bits to form the sparkling easy glide of ‘“Shy.” Color Dolor is an alternative pop band from Helsinki, Finland. Their 3rd album ‘Love’ was released 4th May 2018 with Soliti. ’Love’ won the most important music prize of Finland, Teosto Prize, in April 2019. Color Dolor was founded in 2011, nowadays a duo of singer Stina Koistinen and guitarist-producer Nicolas 'Leissi' Rehn who make all the songs together. “A delicate weave full of colourful details created by strong compositions and the inherently built-in production. The album lets you inside slowly, and it has found what music is at its best.” - Teosto Prize Jury