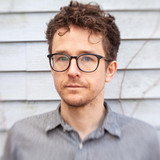 Joyero is the new songwriting project of Andy Stack of Wye Oak (Sounds like Joy Arrow. Or Joy Air, Oh!). In addition to his role as one half of Wye Oak, Stack has gained notoriety in recent years as a multi-instrumental collaborator with Lambchop, EL VY, Helado Negro, Madeline Kenney, and Thor Harris, among others. Written and recorded primarily in Marfa, Texas, during a transitional moment between records, cities, and relationships, Release the Dogs occupies its own liminal space between the natural and the man-made, between the structures we create to keep ourselves safe and the terrifying enormity that exists beyond them. Throughout the record, organic and electronic elements are seamlessly woven together into a single fabric that can be both intimate and explosive. As with Wye Oak’s best records, Release the Dogs finds its own unique voice by holding opposing ideas and aesthetics in tension with each other, and inviting the listener to find their own answer.