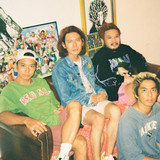 Formed in 2014 and comprised of former classmates in junior high school: Naohiko Morita (vocals and guitar), Kenji Asano (vocals and guitar), Takamasa Yoshida (bass guitar), and Naoyuki Oi (drums). Using their unusual melodies and explosive sound influenced by the alternative scene of the 90’s to their advantage, this 4-person band envelops every venue they play at in a happy groove. They are influenced by Teenage Fanclub,Nirvana,Pixies and Pavement. They performed on "SXSW 2018"and"FUJIROCK FESTIVAL2019,2021""TEENAGE FANCLUB JAPAN TOUR 2019"in Japan,

"SUNSET BEACH MUSIC FESTIVAL2019" in Thailand. TENDOUJI is one of the most beloved bands on the Tokyo punk/indies/alternativescene. They named their music genre "EASY PUNK".