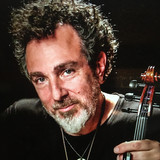 Chris Murphy is a musician with a distinct talent, his ability to nurture and maintain a multitude of musical identities that includes being a singer songwriter, multi-instrumentalist, composer, arranger, and producer. Even more daunting is his chameleon-like music persona that embodies a wide range of musical styles and influences from jazz, blues, country, classical, ethnic and electronic, resulting in a distinct original and powerful voice. He is that rare breed of musician that creates and performs in a wide range of musical worlds with ease. Cyrus Rhodes of Daniele Cutino & The No Depression considers Murphy to be "one of the best songwriters in popular music unjustly flying under the radar.” His fearless exploration of multiple genres has gifted him with the ability to thrive as an independent musician. He has been composing, performing, and recording original music for 30 years mainly in the categories of Folk, Blues, Jazz, Bluegrass and more recently in Ambient music (Seven Crows). He has 16 solo albums to his credit, with an additional 20 albums as a collaborator and producer. A modern-day troubadour and considered a colossus of Americana, he's performed in 40 states in the U.S.A, England, Ireland and The Netherlands. His recent album Sovereign was released on the Friendly Folk Records label featuring over 30 guest musicians. Follow Chris Murphy so you never miss out on any of his hit songs!