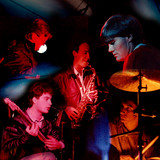 The genesis of Running Blue eminated from some jamming sessions that Alan Kennedy and Damien Reilly had just after leaving school in 1982. From 1982 to 1984, Alan managed to land a few acoustic gigs at the Briars Inn, Bowral. This was a very popular local pub back in the late 70's and early 80's. Around a year or so later in heading into 1984, Damien got together to start jamming with Tim Williams, Kenny and David Frew. Rehersing songs on the weekend gave birth to a few crazy tunes with gems like " Black and Blue " and "Respectable". The song "Black and Blue" by todays standards would not be a pollitically correct song to play, with lyrics about cracking a whip all over town. Tim Williams had a way with words. From these early jam sessions it was clear that the band needed a singer. The call was put out to Alan by Damien and then things started to happen. It was not too long before Damien and Alan had penned 10 or so songs and it was then time to get a proper band together. In the mid to late 80's, the Sydney live music scene was vibrant and happening. The band got tight very quickly, and the crowd like what they heard. By early 1986 it was time to record and see if we could translate the energy we had live into some recordings. The 1st recording session the band had was a live recording session at Damien and Gerrard studios with Russell Pilling producing. You can hear these sessions on the Running Blue album where the tracks are noted as "live".