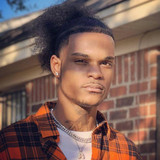 American Rapper "Anthony S. Clark Jr" (Born January 11, 1999). Best known by his professional name "Yung ARO" Originally From Memphis, Tennessee. Were he first gain recognition from his Debut mixtape Titled "Goon To The Streets". However, it was Independently released back in 2015 on mixtape platforms for download and streaming services only.   Anthony has been into music since age 6. losing his Father back in 2008, at such an early age 9, lead to Anthony being raised by his single mom with his other 4 symbolizing. with the help writing lyrics from his older brother "Darius Hampton" during those early stages gave him a passion for music very early.   Every project Anthony released from 2015-present has been Solo Written by him and with this forever lasting talent Anthony has been Labeled one of the Best Song Writer's in the city of Memphis, Tennessee. Meanwhile, Anthony's brother sadly passed away Early October, 2018 at the age of 24 when he was only 19 years of age months before both of their birthdays.   With all the personal issues within Anthony's life he still managed to keep pushing and making his fans and supporters proud. He even released an project on (January 24, 2018) Titled "LOKO WORLD", Dedicated to his Brother on his birthday and will make a series releasing a new project titled "LOKO WORLD" each year on his brother birthday. Also, Yung ARO still continues to put out the best content and gain more recognition each time releasing a new project.