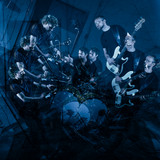 Austrian trio Elektro Guzzi perform hypnotic minimal techno 100% live, using no computers, loops, sequencers, or backing tracks. Consisting of bassist Jakob Schneidewind, drummer Bernhard Breuer, and guitarist Bernhard Hammer, they appear as a normal rock band on-stage, but through oscillators, effects, and metronomic drumming, they lock into machine-like rhythms that could easily be mistaken for the work of a producer armed with drum machines and synthesizers. The trio formed in 2004 and took over half a decade to hone their craft through rehearsals and performances before heading to the studio to record their debut album. The self-titled full-length arrived on Stefan Goldmann's Macro label in 2010. The group had already become a notable live act before their album appeared, performing at the Sónar Festival in Barcelona as well as touring Japan, and they continued their relentless tour schedule. The full-lengths Live P.A. and Parquet and Extrakt EP appeared on Macro in 2011, and Allegro EP was issued by Pomelo in 2012. The cassette Circling Above was released by The Tapeworm in 2013, while Cashmere EP was issued by Macro. The label released Elektro Guzzi's full-length Observatory in 2014, followed by a CD issue of Circling Above and Atlas/Vodolaz Versions (a 12" in collaboration with KiNK) in 2015. The trio's sixth full-length, Clones, appeared in 2016, and the group issued two tour-only cassettes, including a split release with Rocketnumbernine. Elektro Guzzi then moved to the Denovali label for their late-2016 EP Parade, which featured trombones played by Hilary Jeffery, Daniel Riegler, and Martin Ptak. ~ Paul Simpson, Rovi