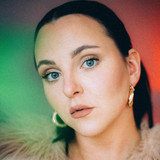 Born and raised in a musical home in the remote village of Ísafjörður, Iceland, Bergrós grew up learning to appreciate various genres and artists. From a very early age, it was apparent that music would be at the center of her world; a major influence and a constant source of inspiration for years to come.   At the age of 6, Bergrós started making sound with various instruments - the creative element of which only adding to her already growing love for music. Teaching herself to play both piano and guitar over the next few years, Bergrós started writing and recording her own music in her bedroom at the age of 15. She comments on the process by stating that "songwriting quickly became a form of therapy for me, a feeling that continues to this day". With vulneranble and relatable lyrics, Bergrós invites people into her own world.   In 2019, Bergrós launched her solo career with her debut single I'll Show You. The single generated considerable buzz and caught the attention of many, including Alda Music, Iceland's leading record label. The label wasted no time and quickly signed Bergrós, adding her to their growing list of renowned local artists.   With her first EP, Bedroom Thoughts, released in August 2020 and her second EP set to be released in 2021, Bergrós is definitely one to watch.