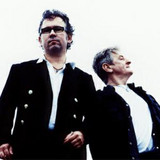 'Born into a repressed, catholic, conservative, small-town, agrarian, angst-ridden and showband infested society we're trying to preserve the positive elements of our background and marry them to the sounds which have culturally invaded our milieu through TV, radio, 45's, fast food restaurants, 24 hour petrol stations and electric blankets!' The Saw Doctors are one of Ireland’s most successful rock bands, racking up Twenty Top 30 hits including three number 1’s and Ireland’s biggest ever selling single.

This unlikely group of rock superstars continue to win over new fans and were proud winners of the Lifetime achievement award at the 2008 Meteor Ireland Music Awards. With seven studio albums under their belts The Saw Doctors have never slowed down with their constant touring keeping them firmly in favour with their ever expanding fan base.