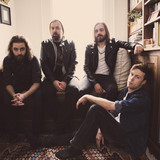 Mixing pop rock elements with captivating harmony vocals, Fairgale is a mix of The Killers, Oasis & Kings of Leon with 3-part harmonies reminiscent of classic rock bands like The Eagles and Crosby, Stills and Nash . Two lead vocalists with distinctly different voices and songwriting style bring a completely new soundscape from one song to the next. Fairgale won the inaugural George Street 'Rock the Block' competition in 2015 and followed that up by releasing their Music NL nominated debut album 'Own the Light' in December of that year. Fairgale were nominated for Group of the Year at 2016's MusicNL Awards, and were chosen as a Regional Finalist in CBC's Searchlight competition. They have toured Atlantic Canada and shared the stage with acts such as Arkells, Trooper, Sloan, Dear Rouge and Yukon Blonde. Fairgale released their sophomore album, "Pillars" in May of 2018.

A new single is due out in August of 2019, and a new album is in the works with a release date to be determined.