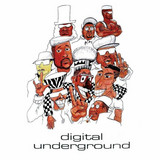 While hip-hop was consumed by the hardcore, noisy political rap of Public Enemy and the gangsta rap of N.W.A., Digital Underground sneaked out of Oakland with their bizarre, funky homage to Parliament-Funkadelic. Digital Underground built most of their music from P-Funk samples and developed a similarly weird sense of style and humor, highlighted by Shock-G's outrageous costumes and the whole band's parade of alter egos. Of all these alter egos, Shock-G's Humpty Hump -- a ridiculous comical figure with a Groucho Marx nose and glasses and a goofy, stuttering voice -- was the most famous, especially since he was immortalized on their breakthrough single, "The Humpty Dance." Over the course of their career, Digital Underground have featured a numerous members, but throughout it all, Shock-G has remained at their core, developing the band's sound and style, which they had from the outset, as their 1990 debut, Sex Packets, proved. Sex Packets was an instant hit, thanks the loopy single "The Humpty Dance," and while they never scaled such commercial heights ever again, their role in popularizing George Clinton's elastic funk made them one of the most important hip-hop groups of their era. Shock-G (born Gregory E. Jacobs, August 25, 1963) spent most of his childhood moving around the East Coast with his family, eventually settling in the Bay Area of California. He dropped out of high school in the late '70s and spent several years pursuing a life of crime before eventually finishing his degree and going to college to study music. Along with Chopmaster J, Shock-G formed Digital Underground in 1987, and the duo released a single, "Underwater Rimes," that year, which went to number one in the Netherlands. In 1989, the group signed with Tommy Boy, and that summer "Doowutchyalike" became an underground hit. By that time, Digital Underground had expanded significantly, featuring DJ Fuze, Money-B (born Ron Brooks), and Schmoovy-Schmoov (born Earl Cook). Sex Packets, the group's debut album, was released in the spring of 1990, and "The Humpty Dance," which was rapped by Shock-G's alter ego Humpty Hump, climbed all the way to number 11 on the pop charts, peaking at number seven on the R&B charts. With its P-Funk samples, jazzy interludes, and innovative amalgam of samples and live instrumentation, Sex Packets received positive reviews and went platinum by the end of the year. Digital Underground followed Sex Packets in early 1991 with This Is an EP Release, their first recording to feature rapper Tupac Shakur. The EP went gold and set the stage for their second album, Sons of the P, which was released that fall. On the strength of the gold single "Kiss You Back," Sons of the P also went gold, but it received criticism for its similarity to Sex Packets. By the time Digital Underground delivered their third album, The Body-Hat Syndrome in late 1993, hip-hop had become dominated by gangsta rap, particularly the drawling G-funk of Dr. Dre, which ironically was heavily indebted to Clinton. Consequently, their fan base diminished significantly, and The Body-Hat Syndrome disappeared shortly after its release. Nearly three years later, Digital Underground returned with Future Rhythm, which spent a mere three weeks on the charts. Who Got the Gravy? followed in 1998. ~ Stephen Thomas Erlewine, Rovi