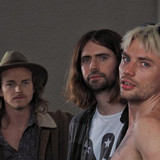 The Vigil release 2nd album ‘Hypervigilance’ 21st August 2020. The Vigil brings a concise banger of an album with Ginger Wildheart producer Dave Draper at the helm. The album was recorded at Rockfield studios where Queen recorded two albums and features 10 slamming rock anthems by the power trio released on the bands own Fever Dog Records as a Digital only release on all streaming and download platforms. The album is features Olly Smith the chief songwriter who has been described as a mix of Liam Gallagher and Kurt Cobain on vocals and guitar, Rhys James on bass and backing vocals who also designed the cover artwork and sky diving adventurer Jamie Davenport on drums. The band recorded the album in 3 days in spring 2019 pulling in mammoth late night sessions with the band putting their heart and soul into the process. Rockfield was an inspiring place and even lead to the band finishing 3 songs in the studio playing those songs together for the first time yielding spontaneous and pure results. The Vigil have a DIY approach and make music simply for the joy of cranking out loud rock songs with passion and heart. The title ‘Hypervigilance’ is a reference to putting out the best version of ourselves and about finding that purpose and drive in life, in these difficult and unprecedented times we live in. A place where we are all becoming hyper vigilant to our surroundings and trying to survive in the unknown. Getting back to what’s important and those you care about.