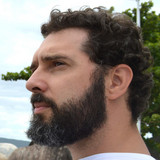 Fiction of popular music - and more to come. I've been composing and playing popular music since ~2000 in the south of Brazil. I create for the attentive listener (which is just a matter of attitude!), believing passionately in the depth of popular heritage, in the journey of experimentation and in the immense human potential of art. Some recent music creation partners are Iara Germer, Ana Carpes, the R.I.S.C.O. collective, folks at Maraka Produções.

In the past years, I delved into electroacoustic music and creative computing, designing the sound and interaction of digital instruments to be played by musicians, dancers and actors, and creating mixed soundtracks for art works and interactive audio for art installations with partners including Atelier Digital O Sítio, João Tragtenberg, João Aires, Juliana Hofman, Kauê Costa, Fûkëi Collectif (France, where I currently reside) and Maria Flôr.