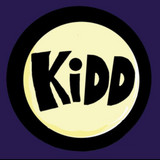 Self Proclaimed Cupboard-Pop pioneer KiDD has been ever present in the Scottish music scene since 2002 contributing to somewhere in the region of 60 albums as a drummer, guitarist, bass player and vocalist. Euros Childs, Gulp, The BMX Bandits, The Pearlfishers, Jonny, Linden and St Deluxe are but a few groups who have enlisted his duties on their records as well as out on the road. He has also released a string of records as a co-writer with Glasgow Favourites The Wellgreen with his partner in rhyme Marco Rea,

and with Joe Kane under the name Dr Cosmo's Tape Lab. In 2014 he co-wrote an album with Welsh Home-Fi Pop writer extraordinaire Ash Cooke (better known as Pulco) via email and released it under the name Poundstore Riot to great critical acclaim. 2016 saw a collaboration with long time friend and ultra-romantic pop stalwart Duglas T Stewart which resulted in the 2017 BMX Bandits album 'Forever', recorded for the most part within the confines of the cupboard studio and released on Elefant Records to great acclaim. In between times, KiDD has written and released a number of his own albums, all in his cupboard where he can be found wrestling with casio keyboards, cheap guitar pedals and an array of percussion, most of which he doesn't know the names of. 2019 sees the release of his 7th Long Player Chance Weekend on Zenzerino Records