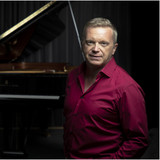 Günther Brück - born in Aachen, Germany - pianist, composer, arranger and producer, is one of the few European musicians whose compositions and arrangements can be found on various international CD compilations and are regulary broadcasted by radio stations in Europe, the United States and Latin America. He has developed a music path that is rooted both in Jazz and in the Afrocuban/Carribean traditions, enableing him to move confidently between the two genres. Upon completing his jazz piano studies he moved to Cuba and on his return he directed the Salsa group "Sin Fronteras", to later join the Croatia-based Latin/Salsa band "Cubismo", giving hundreds of live concerts and TV Shows. He has had important productions such as "Rumba for Vienna" and the most recent "Entre Amigos", adding as co-producer to the album "Renacer" by Alejandra Torres. In December 2018 he received two gold medals (Global Music Award) for his work as pianist, composer, arranger and co-producer with the production "Alejandra Torres - Renacer" in the categories "Best Album" and "Emerging Artist - Violin and Vocals“ and in June 2019 a bronze medal (Global Music Award) in the categorie compositions/composer for his production “Günther Brück - Entre Amigos“ A passionate educator Günther Brück teaches jazz piano and leads the Latin Ensemble at the Arts University, Graz, Austria and he’s frequently travelling the world as a Embassador for jazz education. www.guentherbrueck.com