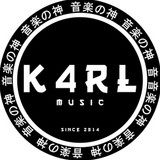 Deep within the human soul, K4rl has been waiting for this day to alight. Now that it has arose from hiding, the world is his next victim. Inspired by various artist spreading from Hip-hop, Rap, Dubstep, and Reggae. His music is made to please your soul, scratch the vibe. K4rl originated from a small country called the Philippines, he grew with several music influences residing in the family. From a young age his grandmother included him in a classical piano class. He was later in a choir that sang to millions of listeners from a local radio station, through the progress of time music was still with him. He later moved to America to continue his education and provide a future much greater than what his home country can offer. From the move he has stayed dormant, making music only for himself, his friends, or just for fun. As of 2014, he has finally decided to put an end to his silence, he picked up his laptop and decided to finally release for the world to hear what he can do. His timing was wrong, it was the producer booming age, many producers were popping up everywhere. He continued releasing music until finally he got a chance to prove his talent is not worth denying, listen to the stories they tell. Follow your DREAM -K4rl