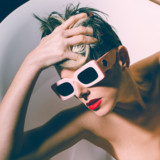 Adi Shaham is a synth pop musician based in Tel Aviv. Adi creates alternative pop in Hebrew, inspired by eighties aesthetic, the riot grrrl movement and the current Israeli indie scene. Adi's music is influenced by the urban surroundings of Tel Aviv and a growing feeling of ambivalence towards the Israeli political climate. Adi's feminist agenda is a vital element in her work. The song lyrics consist of vigilant social criticism about gender roles and male-female relationships. Shaham performs within a trio in which she sings, plays synthesizer and drum machine, Yuval Rozin plays Bass and synth, and Sivan Dahan plays synth, sampler and sings backing vocals. Her debut album “Army of Witches” was released in 2018 and received high acclaims from both critics and audience. The album was played in every major Israeli radio station and was titled one of the 5 best albums for 2018 by the newspaper "Israel Today". The trio has performed on numerous stages and festivals in Israel. Adi is currently working on her second album Last on the Shore and producing music for various musicians and projects.