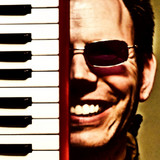 "KevOz wants to take you on a journey of infinite possibilities. The music pules with optimism and heart, cajoling the traveler to listen to the nuances of life." - Awareness Magazine KevOz is Kevin Osborn. He plays synthesizers and other fun electronic gadgets – creating and releasing his own special blend of instrumental music. Not to be defined by or confined to any one genre, his original tunes have ranged from ambient/new age to upbeat electronic to instrumental rock. Along the course of releasing over 15 albums, KevOz's work has been featured in major publications such as Keyboard Magazine, television, and independent film. He has worked with the online portal Groupees (who put together bundles of games, music, comics, and e-books) of the Steam community to help benefit charities around the world. And if you’ve been to Tokyo Disneyland® during the holiday season over the past decade, you’ve heard his atmospheric and high-octane instrumental versions of traditional Christmas classics in Tomorrowland®. Kevin resides in Des Plaines, IL – a splendid little suburb on the edge of Chicago. When he’s not making music, he travels the world with his wife Beth, and enjoys fun adventures with their rescue dog Holiday.