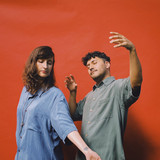 The dazzling, sprawling sonic atmospheres conjured by Brooklyn-based band Parrot Dream envelop and spur the dreamer in all of us. Formed by Christina Hansen Appel (vocals, keys) and Gonzalo Guerrero (guitar) in Santiago, Chile in 2013, the duo relocated to Brooklyn, NY and quickly began making strides amassing more than half a million streams on Spotify. This time would go on to inspire the material that now comprises Parrot Dream’s debut full-length, Light Goes. Signing to Good Eye Records, the LP will see release digitally and on vinyl, including a limited Blood Red color run, on August 24th, 2018. The album was written over a span of two years and touches on themes of connection, love, memories and clarity. The driving title track immediately pulls you into the lush world of Light Goes as Appel’s hypnotic synths and wistful vocals meet Guerrero’s incendiary guitars sparking a fire that burns throughout the LP’s ten tracks. Oscillating between uplifting and elegiac, Parrot Dream draw you in to wade in deep, kaleidoscopic pools of sound as they build up towering, crystalline crescendos.