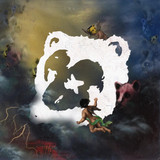 Spillage Village is the supergroup comprised of EarthGang, J.I.D, 6lack, Mereba, brothers Hollywood JB and JurdanBryant and new member Benji. A combination of singers, rappers and producers galvanized by their individual superpowers, acting as digital storytellers in a time where we need our village more than ever. Following in the footsteps of past self-releases Bears Like This (2014), Bears Like This Too (2015) and Bears Like This Too Much (2016), Spillage Village has been dubbed as “one of Atlanta's most musically vibrant posses” (VICE/Noisey). The new project comes after four years of honing in on their artistry, multiple Grammy nominations, sold out shows and chart topping collaborations. They say “it takes a village to raise a child” and Spillage Village aim to borrow from this adage to inspire stories aimed at rebuilding and revolutionizing our communities for the future.