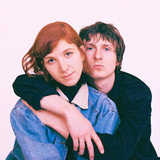 Though Twen got their start in Boston's D.I.Y. scene, their sound was less rough-edged indie or punk and more hard-edged pop with jangly tendencies. The duo released a recording of their very first show and toured incessantly before offering up a more detailed reading of their moody yet hook-heavy songs on their 2019 debut full-length Awestruck. Twen was formed in 2017 by vocalist Jane Fitzsimmons and guitarist Ian Jones when they were living in the Boston area. Both were playing in bands or putting on shows in the area's fertile D.I.Y. house show community, and they soon got together to write songs that were part slightly psychedelic rock and part moody pop. Fitzsimmons' vocal style in the band's earliest days relied on emphatically sung but hard-to-discern lyrics, designed to draw the listener's attention away from prescribed narratives. After moving to Nashville, the duo released a cassette called Twen Live, consisting of five songs recorded at their first show. The band toured steadily throughout the next two years. In 2019 they signed on with indie label Frenchkiss for the release of their studio debut Awestruck. ~ Fred Thomas, Rovi