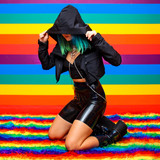 From the very beginning, Transviolet has made a point to approach music differently. Like when they released their first single Girls Your Age, the band sent out 2,000 plain manilla envelopes to kids across the country containing a cassette tape that only said “play me”, not realizing that was pretty near to the exact plot of the horror movie SAW. Blogs and press outlets took notice, but no one cared nearly as much as the mothers across the country when they took to facebook to demand answers, and threaten the band with legal action. It was hilarious. 24 hours later and ‪Katy Perry‬ Tweeted out the song, a week later ‪Harry Styles‬. A flood of attention came to the band and they were thrown into the deep end that is the music industry. Transviolet put out two more EPs, seeing critical acclaim from countless press outlets.   Now in 2021 with multiple support (Twenty one pilots, LANY, ‪Dua Lipa‬, ‪Joywave‬) and headling tours (US, UK) under their collective belt, tens of millions of streams, placements in hit shows like Dickinson, The Chilling Adventures of Sabrina and Riverdale, the independent band has started their own label, and after a year’s worth of writing done in quarantine, Transviolet is gearing up to release their 2nd full length album, Drugs In California.