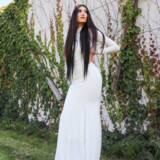 Sarah Hansson – Songwriter, Singer, Topliner and Producer Born in 1987 and raised in Gothenburg by a Swedish father and a Trinidadian mother. Sarah is currently studying Music and Sound Design in a University collaboration programme with Dalarna University, MidSweden University and Linnaeus University. In 2007-2009, Sarah lived in London and performed with various girl groups, including a group led by manager Louise Porter. During this period she auditioned for Louis Walsh and Kian Egan in Dublin and Pharrell Williams in London. In 2013, Sarah performed her song Living Proof in Radio P4 Gothenburg’s final for Svensktoppen Nästa. 2013 – 2017 Sarah lived mostly in Trinidad & Tobago. Among other things, she was a singer in the band IMIJ and Co with many appearances during Trinidad’s Carnival. One of the highlights was being the opening act for Caribbean superstar Machel Montano in his show Machel Monday. Sarah worked with some of Trinidad’s leading producers such as Kasey Phillips and Nikholai Greene (Precision Productions) and Johann Seaton (Madmen Producers) producing tracks like Apple of My Eye and the aforementioned Living Proof. In 2018, Sarah performed her song Som Man Bäddar in the Radio P4 Gothenburg final of P4 Nästa. In 2018 she also released the title Only God (Is Your Superior) dedicated to the human rights movement in Trinidad and Tobago, championed by activist Jason Jones.