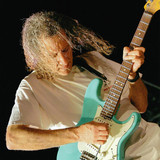 A prolific fusion guitarist, Scott Henderson is a highly regarded virtuoso who initially emerged in the 1980s with his group Tribal Tech. With their intricate, genre-bending sound, Henderson and Tribal Tech became jazz-rock favorites, issuing albums like 1985's Spears and 1999's Thick. On his own, the guitarist has played with Jean-Luc Ponty, Joe Zawinul, and Jeff Berlin, and continued to explore his love of blues, rock, and funk on solo dates like 1997's Tore Down House with Thelma