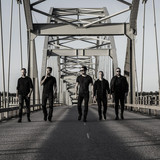 Veteran Swedish progressive hardcore band Raised Fist shape an aggressive, inviting sound by honing punk roots with a death metal edge. Dating back to 1998's Fuel (a favorite of Iron Maiden's Bruce Dickinson), one can hear bass and guitar breakdowns juxtaposed with hardcore. The influence of metalcore made its impact clear on 2001's Ignoring the Guidelines. By the time they issued 2006's Sound of the Republic, they had fully integrated death metal into their sinewy musical identity and emerged with a sound virtually unlike any other punk band on the continent. American acts have cited them as influential due to Raised Fist's politically militant songwriting, top-flight musicianship, and unhinged live energy. After signing to Epitaph in 2013, the band issued a wildly syncopated, swinging, metal crunch and punk & roll album with From the North. Formed in 1993, Raised Fist adopted its name from a lyric in the Rage Against the Machine song "Know Your Enemy": "...born with an insight and a raised fist..." Alexander "Alle" Rajkovic (vocals), Andreas "Josse" Johansson (bass), Marco Eronen (guitar), and Oskar Karlsson (drums) were praised by European critics. Early independent releases such as the 1994 You're Not Like Me and 1996's Stronger Than Ever EPs, along with 1998's well-received debut Fuel, further marked Raised Fist's pinch-hitting approach. Ignoring the Guidelines marked the band's proper major-label debut, issued in 2000 on Burning Heart. The following tour was a massive success, and the band -- adding second guitarist Daniel Holmberg along the way -- returned to the studio the next year to pump out Dedication for their growing base of rabid fans. The record arrived on Epitaph in the fall of 2002, a year after a collection of early material showed up with Watch Your Step. Spring 2006 found Raised Fist dropping their fourth studio album, Sound of the Republic; it was a ferocious record of hardcore and metal produced by Daniel Bergstrand (In Flames, Meshuggah) that featured new drummer Matte Modin (ex-Dark Funeral). Both headlining dates and ones with Comeback Kid were played throughout the summer around Europe. They returned in 2009 with Veil of Ignorance. In 2013 the band signed a two-album deal with Epitaph Records, delivering the first of the two albums, From the North, in early 2015. After a world tour and headline appearances at various music festivals, Raised Fist took an extended break. They reassembled at Top Floor Studios in Gothenburg with producers Roberto Laghi and Jakob Herrmann, and a determination to do things differently. For the first time, the band limited themselves to issuing just ten songs and pursued that goal while writing in the studio. If a different tune emerged in the process, and was collectively deemed good enough to include, the band would drop a previously agreed-upon track off the list. Another first was the thought and care put into the production of vocals and drums, which were given the same level of care in the mix as guitars and melodies. Prefaced by the title track single, Anthems was issued in October of 2019. ~ MacKenzie Wilson, Rovi