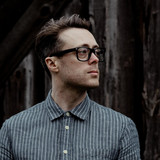 jeremy messersmith is an indie pop singer/songwriter based in Minneapolis, Minnesota. His first album,